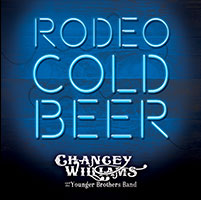 Rodeo Cold Beer, the new album by Wyoming’s Chancey Williams is set to be released on May 19, 2017. The popular country artists’ “Rodeo Cold Beer” tour will kick off with dates in Pueblo, CO and at the legendary Miles City Bucking Horse Sale. The upcoming tour will also include dates with Tyler Farr, Clay Walker, and High Valley.

The album has already garnered some positive feedback through the lead-single, “Down With That,” released last summer. The song featured a successful music video and was awarded “Song of the Year” at the Rocky Mountain Country Music Awards.

Williams co-wrote much of the album with Nashville’s singer-songwriter, Trent Willmon. Willmon has songwriting credits with a variety of popular country artists, including Eric Church, Little Big Town, and Brad Paisley, among others. “I love working with Chancey,” said Willmon, “he is the real deal. He knows how to entertain a crowd and has a great song sense, and he has that cowboy work ethic, respect, and good nature that is almost impossible to find these days.” Grammy Award-winning and ACM nominated audio engineer, Mills Logan, also produced the album.

Rodeo Cold Beer is the much anticipated follow up to the band’s highly successful album, Echo, which found itself appearing on Billboard’s Heatseekers Albums Chart. The album is currently available for pre-order on iTunes or Google Play and will be released worldwide on May 19, available for purchase anywhere you can buy music online. The album’s title track will be accompanied by a music video, premiering on the same day.

Sign up for early ticket sales, discounts, and more