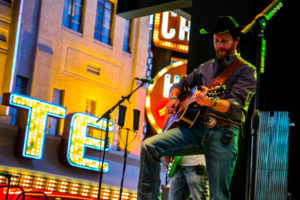 Chancey Williams and the Younger Brothers Band kicked off the night on the Main Street Stage with some of their most popular hits. Shortly after, Drake White and The Big Fire took over the 1st Street Stage, performing their honkytonk tunes.

Over on the 3rd Street Stage, Carly Pearce hyped up the crowd as she delivered a rowdy performance with back-to-back hits from her debut album including “Every Little Thing,” which peaked at No. 1 on the Billboard Country Airplay chart. Michael Ray kept the party going on the Main Street Stage with an hour-long set featuring his No. 1 hit singles, “Kiss You in the Morning” and “Think A Little Less,” followed by “Real Men Love Jesus.”

Afterward, country fans immediately went wild as Neal McCoy took over the 1st Street Stage and showed off his signature sounds with chart-topping hits including “The City Put the Country Back in Me,” “The Shake,” “They’re Playing Our Song” and “Beer Goggles On.” Later in the evening, world-renowned country star Kip Moore wrapped up the 31st Annual Downtown Hoedown on the 3rd Street Stage with an unforgettable performance featuring famous hits such as “‘Bout a Truck,” “I’m to Blame,” “Beer Money,” and “More Girls Like You.”